The QDisc section isn’t correct but it is a good overview.

Meltdown and Spectre provide more evidence, if it really is needed, that continuing to run old, out-of-date kernels is a terrifically risky thing to do.

An update on XDP and CPUMap.

Very interesting. The key is that eBPF programs can be attached to tracepoints.

Worked example of DDOS protection using XDP. It also has this interesting slide: 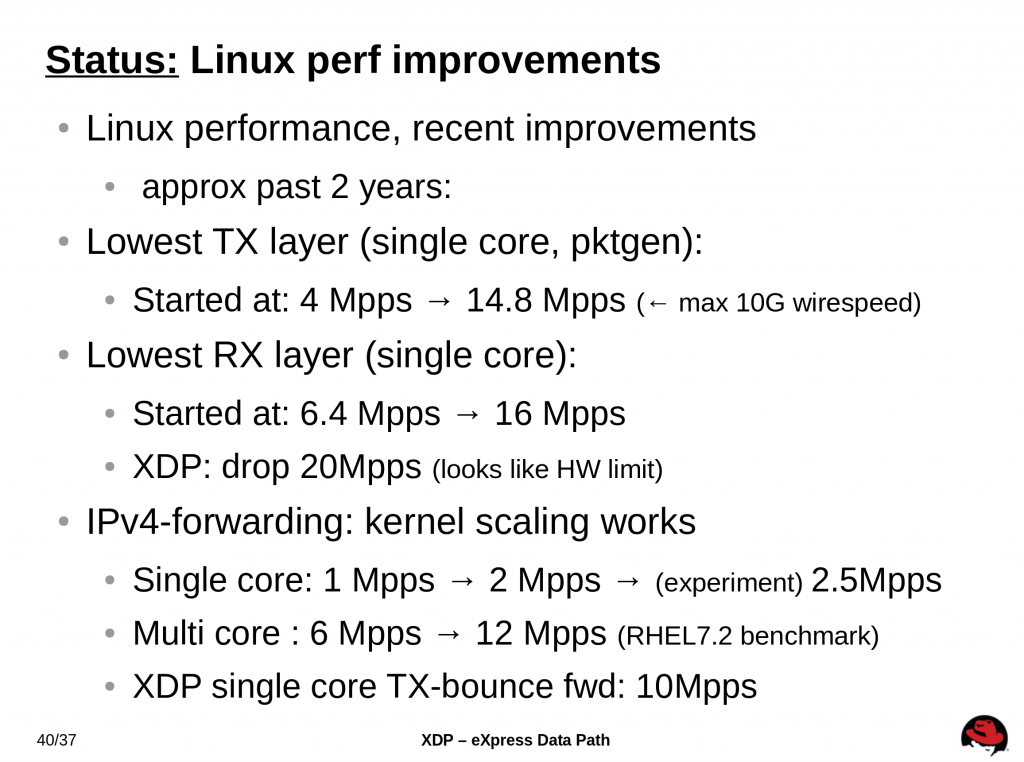 eBPF, part 1: Past, Present, and Future

Coming soon to a 4.11 kernel near you, eBPF maps that can do longest prefix matches for things like IP routing.

There is a lot happening on the XDP front in the Linux kernel these days. This presentation provides a good overview.

I love the idea that eBPF is becoming a policy language for the kernel.

As always, KernelNewbies is the place to go for a great summary of new kernel features. Here’s some 4.10 highlights I’m interested in.

Since the dawn of time, the way Linux synchronizes to disk the data written to memory by processes (aka. background writeback) has sucked. When Linux writes all that data in the background, it should have little impact on foreground activity. That’s the definition of background activity…But for a long as it can be remembered, heavy buffered writers have not behaved like that. For instance, if you do something like $ dd if=/dev/zero of=foo bs=1M count=10k, or try to copy files to USB storage, and then try and start a browser or any other large app, it basically won’t start before the buffered writeback is done, and your desktop, or command shell, feels unreponsive. These problems happen because heavy writes -the kind of write activity caused by the background writeback- fill up the block layer, and other IO requests have to wait a lot to be attended (for more details, see the LWN article).

This release adds a mechanism that throttles back buffered writeback, which makes more difficult for heavy writers to monopolize the IO requests queue, and thus provides a smoother experience in Linux desktops and shells than what people was used to. The algorithm for when to throttle can monitor the latencies of requests, and shrinks or grows the request queue depth accordingly, which means that it’s auto-tunable, and generally, a user would not have to touch the settings. This feature needs to be enabled explicitly in the configuration (and, as it should be expected, there can be regressions)

Recently, I’ve done some work with eBPF and specifically the in-kernel maps that are manipulated and shared by both kernel and user space code.

When doing this I ran into permission errors when installing large maps. It took a little while to figure out that the cause of this was the root user’s locked memory limit being too low (thanks Daniel Borkmann).

The locked memory limit is modified with ulimit:

www.coverfire.com by Dan Siemon is licensed under a Creative Commons Attribution-ShareAlike 3.0 Unported License